“‘Symmetry’ is an aesthetically treated and symbolic representation of the cycles of being and becoming. Underlying the representation is a constant rappel to the Taoist philosophy of yin and yang and the cyclical nature of an esoteric duality. The interrelation and dynamics of the polar opposites are represented in seven parts as symbol of the fundamentally divine nature of the medium. While the visual focus is mostly Taoist, the series borrows religious, mythological, and esoteric symbols to represent the one wisdom underlying all knowledge. Symmetry, the name of the piece, is a constant theme in the series both in its colors, its gender, its gravitation around its centerpiece, and the placements of the objects in the photos.” – Lara Zankoul. 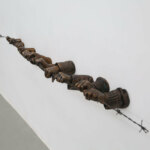 © 2020 Flooxia – Some rights reserved. We try our best to attribute images, videos and quotes to their respective creators and original sources.